Challenge accepted: how to hire remote Python Developer in Europe

HomeNewsChallenge accepted: how to hire remote Python Developer in Europe

It’s much loved by plenty of programmers around the world, both beginners and seniors. Yet, many companies struggle to find and hire Python developers for their projects. Why?

Let’s firstly understand, why they should continue their search, why Python is so cool. And then we will come to the recommendations – where and how to get Python programmers.

It’s been 30 years since Guido van Rossum, a programmer from the Netherlands, created Python code. It became irreplaceable not only in software development but also in Data Science, Machine Learning, and more applications around technology.

Thousands of companies now leverage the power of Python – including giants like Google, Netflix, Instagram, and Shopify.

There is a list of features that makes the Python framework so attractive:

As being said on trio.dev, “one of the unique aspects of Python is that there are tons of packages or modules that a developer can add to their code…” and it “allows you to develop and deploy your application to most hardware and software ecosystems”.

It’s a kind of universal language for any level of web development projects.

At reintech.io, they name a few more perks of using Python, particularly:

When to use Python

JetBrains surveyed their coders and concluded that Python is mostly used for web development and data analysis. They are followed by: Machine Learning, Web Parsers, System administration / Infrastructure configuration / Automation scripts, Automated unit tests, prototyping, education, and so on. 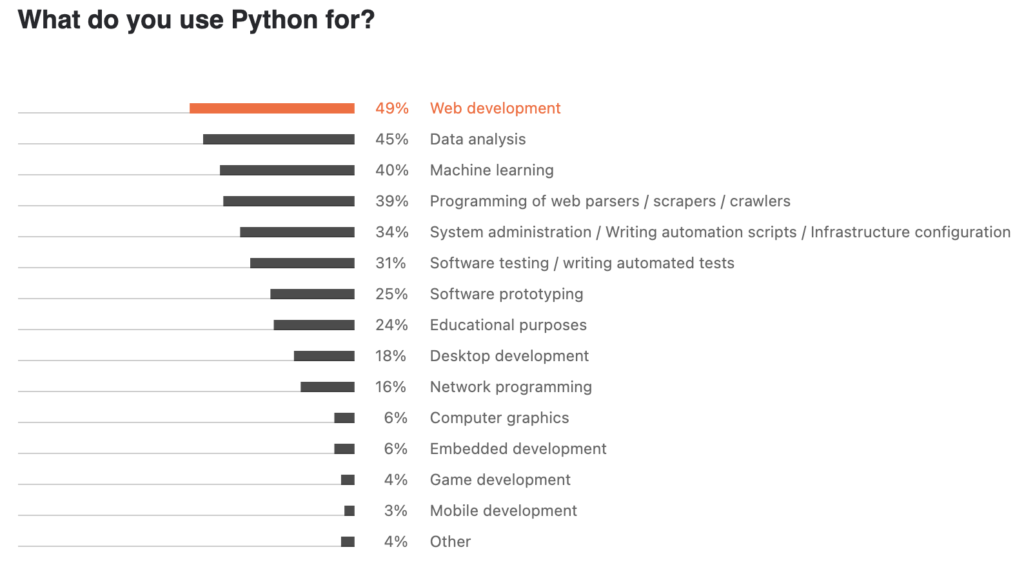 Where to find Python developers

Check LinkedIn, Indeed, Glassdoor, CareerBuilder, and other job portals – and you will understand that the most optimal would be to hire Python developer from Europe. Especially – from Eastern Europe. They will have high technical skills, are usually hard-working, and won’t cost a fortune to hire.

It may work for both formats – relocating them to join your in-house team or collaborating with remote developers. In any way, there is a big variety of sources and service providers ready to augment or strengthen your development team. Or build it from scratch.

You can also publish a project on the freelance marketplaces – Upwork, Fiverr, Freelancer, as well as more narrow ones like Python.org, Gun.io, and Lemon.io. These are the places where you can find a variety of professionals that use Python.

F6S and Angel.co are good places to go, startups are usually posting their jobs there. So, coders that are in search of an interesting project will probably register there too. Other similar platforms to look at are Remotive, WWR.

Events will be another good spot, but you have to spend some time attending them, browsing through the list of attendees, and approaching each and every one of them to get acquainted and learn about their experience. Leading developers will be among the speakers, so it’s a hunting zone, so to say.

Such sourcing methods are quite time-consuming and may also cost money (tickets, access, travel expenses as well).

Finally, if you would like to cut the cost (and time) on sourcing, or if you don’t have enough resources to organize the hiring process fully, get the partner in crime to manage this for you.

Open any good rating aggregator (Clutch.co, Goodfirms, The Manifest), and filter out outsourcing or outstaffing companies in Eastern Europe.

Python is very popular in these areas, and you can build a long-lasting collaboration with these agencies (or consultancies), thus having a constant provision of Python and many other ICT professionals.

Average salary of a Python developer

This will very much depend on the years of experience and the technology stack of the programmer. In Europe, languages knowledge is also crucial.

On the chart below, you will see the dynamics of the Pythonists’ salaries growth in recent years. 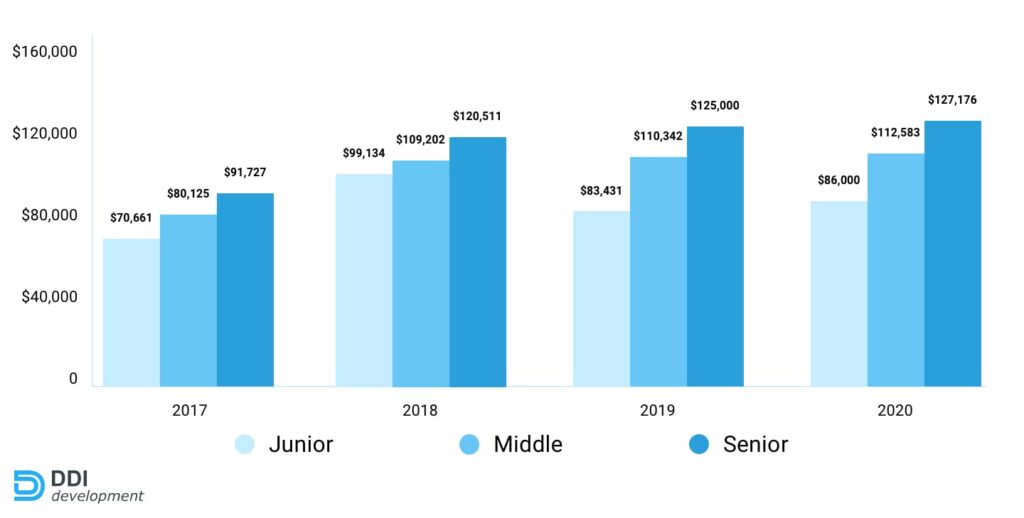 Hard and soft skills the Pytonist should have

When you will be scrolling through the resumes, check the following skills and knowledge to spot a good coder:

To ensure that you found a good Python developer, you should know what particular sets of skills you need them to have to deliver the software for your business.

Should you have any doubts – consult with the professional outstaffing agencies and speak to a couple of Senior Pythonists working at other companies. LinkedIn connections and Reddit might be helpful too.

SmartBrain.io – outstaffing platform providing top developers of Middle + / Senior level for the IT development projects of any complexity. Hire the best engineers starting from $40/hour.